These are my observations from the fitting, sewing, and modeling of two dresses made from very similar materials and worn by the same person, Sheree. The only difference between these dresses (besides sleeve treatment) is that one was fitted with a curved front closure and the other with a straight front closure. I have also included Sheree’s thoughts on how the dresses felt while worn.

Pros of the technique

Easier to fit to the point of support and a pleasing silhouette due to the spreading of tailoring between the side and front seams, in addition to the armhole and shoulder seams.
You can achieve a very high-busted look which many people find quite attractive.

Cons of the technique

– If not careful with original fitting, the center-front seam can curve or twist when the gown is laced up, since this seam is not cut as a straight line.
– If you lose weight, this method will cause a pouching effect along the center-front curve of the bust. Also, altering gowns made in this style after weight loss can be problematic if you must also alter the center-front seam. It could mean redoing all of the eyelets again.
– Harder to fit to the point of support and visually-pleasing silhouette, since all tailoring occurs along the side seams, armhole, and shoulder seams.
– Can be more challenging for a woman with a large bust than for a woman with a small bust, as there is more flesh to re-arrange by the force of the fabric and seams alone. This technique moves the bust further out of its natural position than the curved-front-seam method does, and therefore has gravity working against it all the more.
– If the side seams are not shaped just right, a large bosom can appear to be compressed on the outside-bottoms of each breast, such that the breasts appear to push inward against each other. Another easy mistake to make is the dreaded “quadro-boob”, in which horizontal tightness across the center of the bosom creates an unfortunate bulging above and below the line of tightness.

This method produces a natural-but-pert bust silhouette. In comparison to the straight-front-seam method, the bust retains its globular shape at the bottom of each breast. Instead of having a ‘shelf’ effect at the top of the bust, there is a shelf effect at the bottom, where the breasts rest on the tight fit across the front of the ribcage just below the point at which the breasts end. This look can be found throughout the period art of the late 14th and early 15th centuries, all over Europe. For some specific citations, click here. 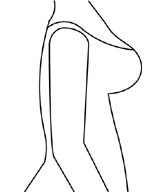 This method seems to produce a bust silhouette that elevates the bosom out of its natural globular shape into a ‘shelf’ position, whereby the tops of the breasts are rounded and rather high and the bottoms are compressed upwards in a gradually expanding arc. I was reminded of the effect that a Tudor corset has on the bust. For citations of some specific period art pieces which have a similar bust silhouette, click here. 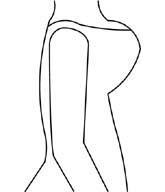 How does it feel on the body?

Sheree comments: “Much more comfortable [than the straight-front-seam gown]. Fits tight, not confining, but still gives support to the bust. Support feels like one is wearing a well fitted bra, in that you feel as if the support is coming equally from the shoulders and under the bust from the fitted seams.
“Range of arm movement is much better. No extreme pulling at armhole seams when arms are lifted above the head. Am able to take normal breath without constriction of the diaphragm or lower rib cage.
“Bust feels like it’s in a more normal position. Not press together in the middle or pushed up towards the throat. The bust feels secure in the gown no feelings that one will pop out. No feeling that I didn’t have enough support. No Jello-jiggling of the boobs.
“I can easily see how a women having to wear a gown like this every day could have worked about the home
with limited restriction of movement. Yes, she could have picked up a basket and hung laundry on a line.
My own thought is that for anyone that is large busted, C-cup or bigger, the curved front seam would be the more comfortable of the two styles. Little risk of quadro-boob.”
Sheree comments: “Feels like I’m corseted in. I feel the pull from the arm hole down and under the bust. Like a tight bra with underwire. All support feels as if it’s coming from the lower portion for the armhole seams and the tight fit under the bust. I didn’t feel much if any support coming from the shoulders.
“Taking a deep breath is similar to when I’ve worn a corset. It is flattering to the waist line with the tight fit.
“Maybe possible that additional support could come into play if the should seam is wider, but then you would loose the period look of that gown.
“Biggest problem is lifting arms above the head. Because the arm holes have to be cut high into the armpit and support is coming from that armhole seam arms have limited range of movement.
“Bust does visually appear as if the breasts will pop out, but they are quite secure in the gown. Even with pushing and prodding, the bust wants to gravitate to the center for the mono-boob effect.
“For someone with a smaller bust the straight front seam might work well. It would give them more cleavage but fitting does appear to be very tricky. The armhole has to be well up into the armpit to avoid pressing the bust into quadro-boob. “

Things I would do differently next time

During this particular fitting, I do not feel I made any major mistakes, which is not to say such things haven’t happened before. I am more familiar with this method of fitting, having developed it on my own and used it numerous times before this experiment. One minor mistake I made, however, was in the fitting of the armhole. I don’t believe that I fit it closely enough into the armpit, though Sheree felt it was comfortable enough.
To be fair, I made mistakes in the fitting of this gown. I believe that I should have cut the back of the gown higher than I did, and indeed, the curved-front-seam gown has a higher back, which added considerably to Sheree’s comfort in it. I also did not cut the armhole as close into the armpit as possible, and in retrospect, I think this would have helped with freedom of arm movement. Finally, I think that in my desire to lift the bottom of the bosom I fit the gown a tad too tightly. Sheree would have probably been more comfortable with a half-inch extra on each front panel.

This website uses cookies to improve your experience while you navigate through the website. Out of these, the cookies that are categorized as necessary are stored on your browser as they are essential for the working of basic functionalities of the website. We also use third-party cookies that help us analyze and understand how you use this website. These cookies will be stored in your browser only with your consent. You also have the option to opt-out of these cookies. But opting out of some of these cookies may affect your browsing experience.
Necessary Always Enabled
Necessary cookies are absolutely essential for the website to function properly. These cookies ensure basic functionalities and security features of the website, anonymously.
Functional
Functional cookies help to perform certain functionalities like sharing the content of the website on social media platforms, collect feedbacks, and other third-party features.
Performance
Performance cookies are used to understand and analyze the key performance indexes of the website which helps in delivering a better user experience for the visitors.
Analytics
Analytical cookies are used to understand how visitors interact with the website. These cookies help provide information on metrics the number of visitors, bounce rate, traffic source, etc.
Advertisement
Advertisement cookies are used to provide visitors with relevant ads and marketing campaigns. These cookies track visitors across websites and collect information to provide customized ads.
Others
Other uncategorized cookies are those that are being analyzed and have not been classified into a category as yet.
SAVE & ACCEPT